Episode 18 / How The Grinch Stole Christmas / The Empire Strikes Back 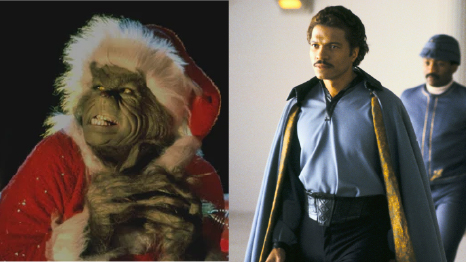 The Empire Strikes Back

Maybe you need to grow up with the Star Wars movies to love them.

We started doing our movie podcast earlier this year, and the first movie we covered was the original Star Wars (A movie I stubbornly only refer to as Star Wars.). Laci had not grown up with the Star Wars films, and while she had seen them once as an adult, she admitted she wasn’t paying close attention or giving them much of a chance. But this time, she was going to try to get invested in the story and the characters, and see what all the fuss was about.

She was not impressed. She thought the acting was bad, the characters uninteresting, and the special effects notable only for the time they were made. She complained most of all that the movie didn’t make her care about any of the characters. I begrudgingly accepted her take, but thought that if she saw The Empire Strikes Back her opinion would be higher, because Empire improves upon everything from the original and invests much more in its character development.

But she watched The Empire Strikes Back and felt largely the same about it as she had Star Wars. Now, she is only one person, but I have heard from people who did not grow up with these movies that, even if they like them, they don’t “get” why they mean so much to other people. So, I suspect two things:

1) The viewer must watch these films in childhood to love them as adults. Seen through a child’s eyes, the broad strokes with which Luke, Han, and Leia are painted make far more sense. These imprinted feelings linger with the viewer as she ages, and she continues to have tremendous affection for the characters and cares far more about what happens to them.

2) Absent that depth of feeling for the characters, the original Star Wars movies are impressive technical feats and have much to commend—the music, the innovative effects, the density of world-building—but are hard to appreciate on anything other than an intellectual level. “Yeah, this is pretty good… but I don’t feel the way the way people who love these movies feel.”

I’m normally very good at separating my nostalgic feelings for a work and my grown-up assessment of it. If I compare the Star Wars movies to, say, the Indiana Jones movies, I don’t see a ton of difference in terms of quality—they are very similar in terms of filmmaking, acting, and tone. And yet, something about Star Wars makes me want to learn everything about its universe, has me thinking about its characters and reliving scenes in my mind over and over again, whereas my feelings about the Indiana Jones series is that it’s very good… and that’s about it. The major difference is I watched one series before age 10, and the other after. Is that all there is? I don’t want that to be the case, but maybe that’s all that’s going on here.